Discuss the theory and modeling of rotor aerodynamics.

I would appreciate comments on the above argumentation. From the explanations in the AeroDyn Theory Manual and the cited work of Minnema, the functionality of the Unsteady Aerodynamics Model for attached flow can (very) roughly be described as a time lag of the aerodynamic loads on the airfoil sections caused by a change of the AoA. As described above, in addition to the oscillation of the AoA over the azimuth angle, the magnitude of the local inflow velocity also undergoes a cyclic variation. From my understanding, this change of the local inflow velocity should also be modeled with some kind of time-lag model.

Is such a model part of the Unsteady Aerodynamics Model? More precise: Does the Beddoes and Leishman model in the variant of Minnema and Pierce in AeroDyn v15 include the modeling of a dynamic change of the local inflow velocity (magnitude) or does it only consider dynamic changes in the AoA?

I would be pleased to get some advice on this question. For sure, I am also open for objections on the underlying argument.

Thanks in advance and stay healthy,
Christian
Top

Dear Jason and others,

thanks for the quick advice. I comment on your points in the list below and explain some simulations I performed to get a little bit closer to the problem afterwards. At some points, I go pretty much into detail and I don't expect anyone to take his or her time to go through all of this and follow my thoughts. Still, I would appreciate if you or anyone else likes to comment on certain parts.

In order to check if the conclusions I draw from the argumentation in 3. may be correct, I tried to set up some simple test cases in OpenFAST with AeroDyn v15. This is surely not the cleanest way (in comparison to using the stand-alone driver) to do this, but I hope it works. The simulation is set-up as follows: Wind turbine rotor in parked Position (blade 1 at 0deg azimuth / pointing upwards), near 90° pitch angle to get a local AoA of around 2° at the blade section under observation, uniform inflow. WakeMod: none (no induction model). (Please ask, if information is missing.)

The first test case should model a sudden change of the AoA without any other effects. This is realised by a fast change of the inflow wind direction of 1deg. The graph below (and attached) shows the blade loads in y direction (which is more or less equal to the lift), the local AoA and the local inflow velocity of an exemplary blade section. The results without the Unsteady Aerodynamics model are represented in dashed lines. 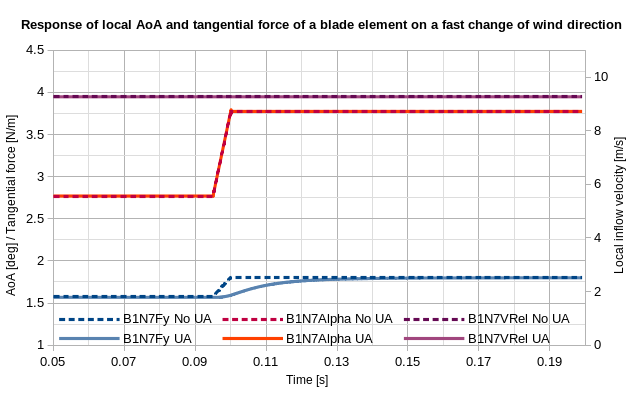 All in all, the graph shows the expected behaviour: A step-like increase of the AoA at constant local inflow velocity and a increase of the "lift" force. When using the UA model, a time lag is visible as response to the change of the AoA.

The second test case should model a sudden change of the local inflow velocity without any other effects. This is realised by a fast increase of the inflow wind velocity of 1 m/s. Results without UA are not plotted, as they are identical to the results with UA activated. 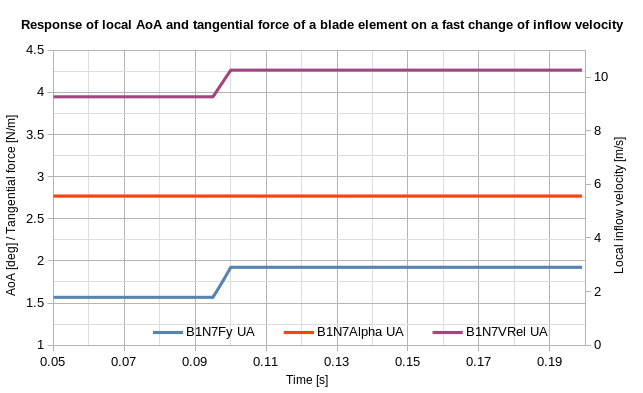 So from my tests, it seems that a change of the inflow velocity will have an influence on speed of the decay due to a change in the AoA. But a dynamic change of the local inflow velocity itself will not be captured by the UA model. Still, there may be some issues in the modeling or my understanding. I would appreciate some comments and would like to ask for some inconsistencies or possible mistakes in modeling you can see or guess.

Best regards and many thanks for the advice,
Christian

Thanks for the detailed response. I agree with everything you've said. And thanks for correcting my point (3). Indeed the first equation you state is the one that led me to be believe that variation in relative velocity magnitude could lead to a minor variation in the coefficients, but as you point out, this is not the case for the reasons you explain.

Dear Jason,
thanks for your help. I really appreciate that you and your colleagues take your time to help others.

Users browsing this forum: No registered users and 1 guest